Swinomish Casino & Lodge is now open 8am to 2am daily. Specific areas may be temporarily closed and will reopen in stages. Please review our new safety protocols prior to returning. We're excited to welcome you back!

There are several new table games based on Texas Hold’em that have become popular all across casino floors. One of these games is Ultimate Texas Holdem. This game was designed by Roger Snow of ShuffleMaster and is played on a Blackjack style table that can accommodate several Players. 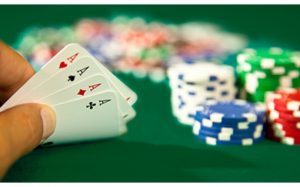 Ultimate Texas Hold’em is similar to a regular Poker game, except that Players compete against the Dealer and not the other Players at the table. To achieve a five-card Poker hand that is higher than that of the Dealer.

To begin each round, Players make equal bets in the Ante and Blind circles and may also make the Trips bonus bet. Once Players receive their two hole-cards, they can either check or bet three to four times their Ante.

The Dealer then reveals the three-card flop. If Players haven’t already made a Play bet, they can check or bet two times their Ante. The Dealer then reveals the turn and the river, and if Players have not already bet, they can fold or bet one times their Ante.  Next, the Dealer reveals his or her two hold-cards and announces the hand. If the Player’s hand beats the Dealer, his or her Play and Ante bets win even money. If the Dealer’s hand beats the Player’s, the Player loses the wager.