Swinomish Casino & Lodge is now open 8am to 2am daily. Specific areas may be temporarily closed and will reopen in stages. Please review our new safety protocols prior to returning. We're excited to welcome you back!

Although “Pai Gow” is an ancient Chinese form of entertainment played with domino-like tiles, the game recognized today as “Pai Gow Poker” is a more modern version. Pai Gow traces its roots to the Song Dynasty (960 – 1279), when up to eight Players would arrange four tiles each into two pairs called the “front hand” and the “back hand.” The object of the game is to defeat both of the Banker’s hands, respectively, to claim even money on a wager. 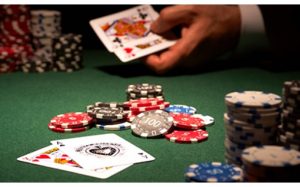 Pai gow (tiles) is perhaps the oldest casino game and its name roughly translates to “make nine.” Though many American Players are just now becoming more aware of Pai Gow Poker, the origins of the classic Chinese game were first played over one thousand years ago and was a popular diversion among soldiers and citizens alike, a fact that is reflected in its two suits (military and civilian).

Though the original game of Pai Gow has been offered in various casinos around the world for several decades, largely in an attempt to cater to the many Asian tourists, Pai Gow Poker didn’t appear in American casinos until 1985 when it was first played in a small California gambling establishment. Within five years it quickly spread east across the United States, appearing in Las Vegas in 1986 and making the jump to Atlantic City shortly after.

Today, Pai Gow Poker has a worldwide following and is a popular choice at many casino gaming tables. The game is easy to learn and play, and it has the added appeal of being low risk. Wagering at one-to-one odds doesn’t win or lose much in the short term. Many compare the game to Baccarat in that aspect, and just like the classic French game, Pai Gow Poker easily lends itself to high stakes play.

It is played with a traditional deck of 52 playing cards plus one Joker- used only as an Ace or a wild card to complete a straight or flush. The dealer starts the game by rolling three dice to determine which Player receives the first set of cards. Each Player receives seven cards and creates two hands simultaneously. Ideally, the Players would create a high hand and a second-high hand. The Player wins if both hands are higher than the banks and the Player loses if both hands are lower than the banks. If one is higher and the other is lower the game is a tie.